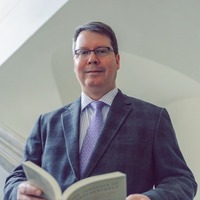 Abstract: Is secularism a disguised form of Christianity?  A new religion? Or something altogether different? One of the paradoxes of the modern age is that it was built partly on a biblical foundation, but dramatically altered our understanding of Christian and Jewish traditions--in some cases, by rejecting these entirely. Thomas Hobbes’s Leviathan (1651) illustrates this paradox. I will offer a new reading of Hobbes’s controversial masterpiece, and argue that his attack on the biblical tradition went further than even his staunchest critics have recognized. This will lead us directly to a reappraisal of the relationship between religion and politics in our contemporary secular order.


Yelle Bio: Currently a Harris Distinguished Visiting Professor at Dartmouth, Robert A. Yelle is Professor of Religious Studies at Ludwig Maximilian University, Munich. He received an A.B. in Philosophy at Harvard,  J.D. (Order of the Coif) at UC Berkeley, and Ph.D. in the History of Religions at the University of Chicago. Yelle has received fellowships from the University of Toronto, the University of Illinois, NYU Law School, and the John Simon Guggenheim Memorial Foundation. He is the author of Explaining Mantras (Routledge 2003), The Language of Disenchantment (Oxford 2013), Semiotics of Religion (Bloomsbury 2013), and Sovereignty and the Sacred (Chicago 2019), and the co-editor of, among other volumes, After Secular Law (Stanford 2011).

Events are free and open to the public unless otherwise noted.